Testing is a crucial part of developing robust and high-quality software. That’s why Embark aims to make testing our Smart Contract as easy as possible. In this guide we’ll explore Embark specific testing APIs and how to write tests for our Smart Contracts.

Test files resides in a project’s test folder. Any JavaScript file within test/ is considered a spec file and will be executed by Embark as such. A spec file contains test specs which are grouped in contract() functions. A single spec is written using it() blocks.

This is a single test spec which will always pass. We’re using a globally available assert object to make assertions in our specs. If you’re familiar with the Mocha testing framework, this syntax might be familiar. In fact, Embark uses Mocha as a test runner behind the scenes.

contract() is just an alias for Mocha’s describe() function and is globally available. In general, global functions and objects are:

If we want to use any of EmbarkJS’ APIs, we can require it as expected:

For more information on EmbarkJS’s APIs, head over to this guide.

Once we’ve written our tests, we can execute them using Embark’s test command:

As mentioned earlier, this will pick up all files inside the test/ folder and run them as test files.

If we aren’t interested in running all tests but only a specific subset, we can specify a test file as part of the test command like this:

Running tests against a different node

By default, tests are run using an Ethereum simulator (Ganache). We can use the --node option to change that behavior. Passing --node embark to embark test will use the Ethereum node associated with an already running embark process. We can also specify a custom endpoint, for example:

When running tests, we can even get an idea of what the gas costs of our Smart Contract deployments are. Embark comes with a --gasDetails option that makes this possible.

When running tests, the default [environment}(/docs/environments.html) is test. You can obviously change this using the --env flag.

The special thing with the test environment is that if you do not have a test section in your module configuration, that module with be disabled (enabled: false). This is done to speed up the test as if you don’t need a module, it is disabled.

To do that, Embark adds a global config() function to the execution context, which uses the same API as the configuration object for our application’s Smart Contracts. So if we had a SomeContract that should be picked up for deployment, this is what the configuration would look like:

One thing that’s important to note here is that, behind the scenes, Embark has to run config() first to deploy the Smart Contracts and only then starts running tests. This will have an impact on the developer experience when importing Smart Contract instances within spec files. But more on that later.

A note on config()

The global config() function is used for Smart Contract deployment and therefore delays the execution of tests until deployment is done.

To write meaningful tests, we obviously want to interact with our Smart Contracts. As we know, Embark generates Smart Contract instances for us. All we have to do is importing and using them accordingly.

The following code imports SomeContract and calls an imaginary method on it inside a spec:

There’s one gotcha to keep in mind though. Looking at the snippet above, it seems like we can use SmartContract right away once it is imported. However, this is not actually true. As mentioned earlier, Embark first has to actually deploy our Smart Contracts and until that happens, all imported Smart Contract references are empty objects.

This is not a problem anymore when using Smart Contract instances inside spec blocks, because we know that tests are executed after all Smart Contracts have been deployed. Embark will hydrate the imported references with actual data before the tests are run.

Accounts within the testing environment can be configured just like we’re used to. The same rules apply here, and configuring an Ether balance is supported as well. Configuring custom accounts in tests is especially useful if we want to use a specific account for our tests.

Obviously, we want to access all configured accounts as well. Sometimes we want to test functions or methods that require us to specify a from address to send transactions from. For those cases we very likely want to access any of our our available accounts.

All available accounts are emitted by config() and can be accessed using a callback parameter like this:

You can also grab the accounts from the callback of the contract() function (describe alias):

Connecting to a different node

By default, Embark will use an internal VM to run the tests. However we can also specify a node to connect to and run the tests there, using the host, port and type options as shown below:

You can configure the different Embark modules directly in your test file. The available modules are: storage, namesystem and communication.

If the module is not started (eg. IPFS), Embark will start it for you.

As mentioned earlier, Embark handles the deployment of our Smart Contracts using the function config() function. If we wish to deploy particular Smart Contracts manually, we can do so using an imported Smart Contract reference. We just need to make sure that we’re doing this inside a contract() block as discussed earlier:

Using assert.reverts, you can easily assert that your transaction reverts.

Returns a promise that you can wait for with await.

Using eventEmitted, you can assert that a transaction has emitted an event. You can also check for the returned values.

This function lets you increase the time of the EVM. It is useful in the case where you want to test expiration times for example.

This function mines a block and sets its block.timestamp accordingly. It let’s you mine in the future.

timestamp: [Number] Timestamp when to mine the block

getEvmVersion returns the version and type of EVM.

Embark allows you to generate a coverage report for your Solidity Smart Contracts by passing the --coverage option on the embark test command. 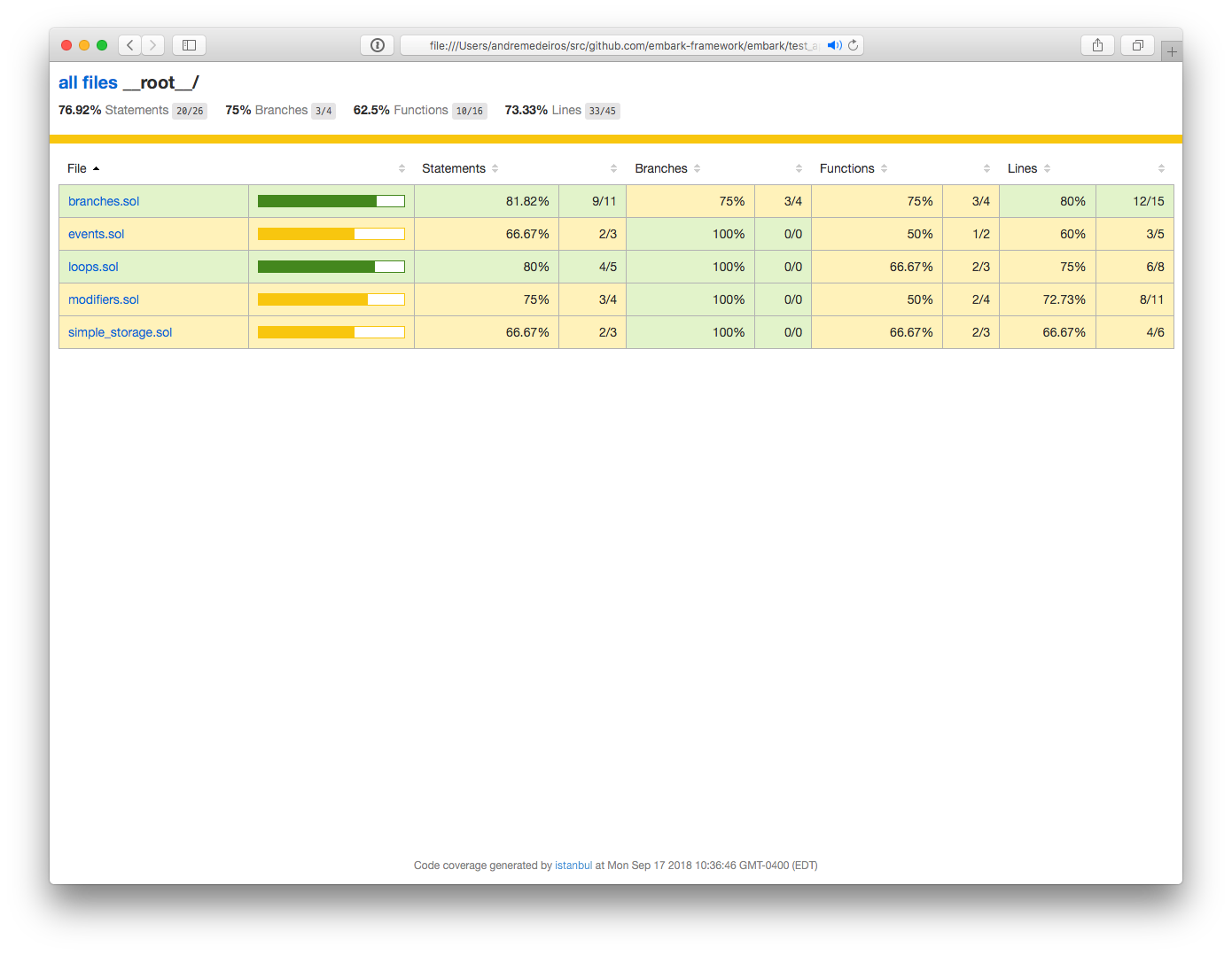 This gives us a birds-eye view on the state of the coverage of our Smart Contracts: how many of the functions were called, how many lines were hit, even whether all the branch cases were executed. When selecting a file, a more detailed report is produced. Here’s what it looks like: 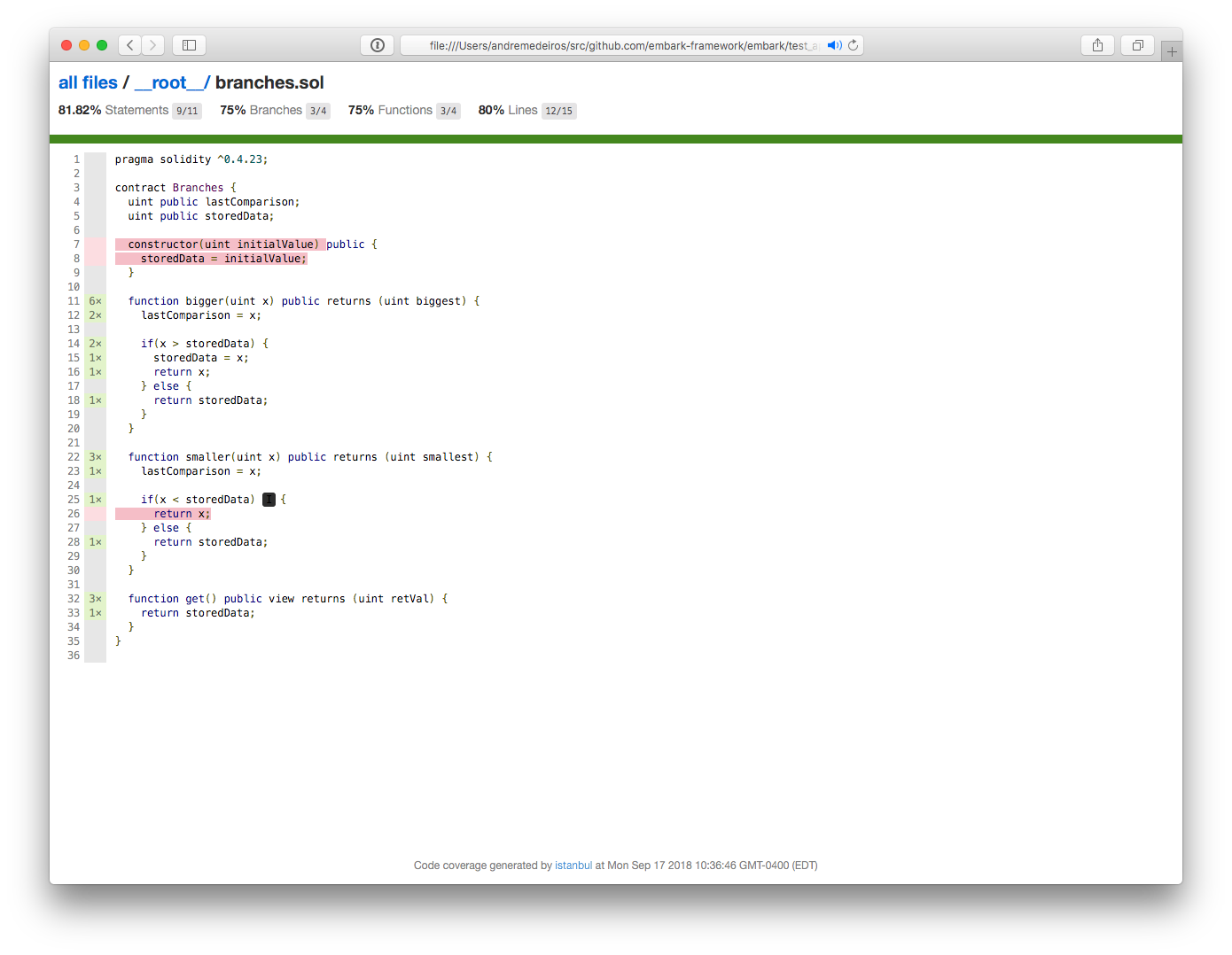